Cyclists are cool, intelligent and generous. And that’s official. 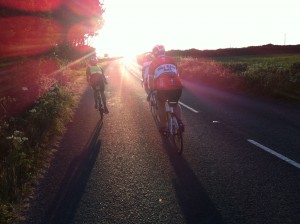 This might all sound like a bit of spin – marketing cyclists as the new celebrities. But it comes from research commissioned by the British Heart Foundation. The Implicit Association Test examined people’s subconscious attitudes towards different sports. And it found cyclists are considered to be 13 per cent more intelligent and ‘cooler’ and ten per cent more charitable than other people.

The survey, conducted by Mindlab, also showed almost two thirds of 600 adults surveyed admitted to liking lycra. Nearly a quarter of people in the study said they would prefer to date a cyclist over other sporting people. And 27 per cent would also want a cyclist on their pub quiz team, compared to 18 per cent preferring a footballer.

The BHF commissioned the research to mark the opening of registration for its annual London to Brighton bike ride in June – the biggest charity bike ride in Europe.