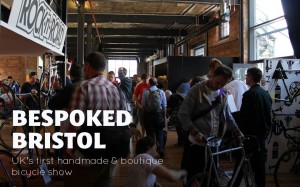 Bespoked Bristol established itself as the greatest handmade bicycle show in Europe. It became the place to drool over beautiful steel creations and wallow in what it took to design the perfect bike. Personally, I loved the event and what it stood for. And all the bike brands who exhibited there who I know seemed to rate it highly.

But Bespoked is now on the move. Its hand forced by Bristol council selling off part of Brunel’s iconic train shed at Temple Meads station, where the event was held for years, Bespoked will surface in 2014 at the new venue of the Olympic Park in Stratford, East London. Exhibitors will set up stands in the velodrome itself, on the flat area inside the track or on the banked seating.

This week I was with a Signal client who wasn’t delighted that the event was moving to London. Nor were they particularly happy with the layout of the event within the velodrome. Others have expressed their sadness that a key trade show has ended up in London. Taking to social media, show exhibitors’ comments included: “That’s a terrible shame”; “The provinces need more active cycling culture”; “I probably will be exhibiting, but I’m not that keen on it being in London to be honest”; and “I just always thought it was great it being in Bristol.”

Organiser Phil Taylor has defended the decision against accusations of Londoncentricism. “We looked all over the country and the velodrome is such an amazing space and it just happens to be London”, he said on Twitter. And, separately, “It has moved once before and coped, so I see no reason why that won’t be the same again.”

Phil has pointed out that the velodrome is “one of the greatest cycling buildings in the world”. It’s the centrepiece of the Lee Valley Velo Park which finally opens to the public on March 4th 2014 – just five weeks before Bespoked arrives on April 11 to April 13. It will certainly be a great chance to visit the new UK cycling facilities to see if that Olympic sparkle remains embedded in the boards and banking. And to once again drool over beautiful steel.